I started writing this post the night before my daughter was scheduled to go in for her first of two surgeries last week for correction of Scoliosis but I just couldn’t keep my mind focused or distracted enough on anything for any length of time to finish it.  My mind was clouded and consumed with many thoughts and they fluctuated into good and bad areas frequently.  The night before I was working hard to embrace my optimism and feeling very positive that the surgery was going to be seamless, after all it was her 10th surgery and she’s blown through all of them like a trooper but my underlying state was anxiety and fear, which is something I always have because there is something about anesthetic that scares me.  I knew that the recovery was expected to be long and possibly quite painful and like any parent, my strongest desire was to alleviate any and all discomfort she experienced but that was something I knew I would have absolutely no control over.

Regardless of how medically necessary I knew it was for her to have this surgery and no matter how many positive thoughts I had about how she would be down the road, I knew that it was the time in between those two points that was going to be difficult.

The doctor had advised that Scoliosis surgery is one of the big ones, right up there with heart surgery and I had to keep reminding myself that the best thing for me to focus on was that it could be worse.  She could have had something medical develop that has a lower likelihood of a positive outcome which some kids and parents have to go through and accept and of course I’m sure like every other parent that has to watch their child endure a big challenge, you can feel overwhelmed and helpless.  The need and desire to protect and “take away the hurt” is how I relate to hearing parents say the familiar phrase to their kids “this is going to hurt me more than it hurts you”.  It really does feel like you are bearing the entire weight of it all or trying to at least, and surprisingly most kids power through these things better than we might have initially expected.

I firmly believe that “Everything Happens for a Reason” and even though I don’t know what that reason is yet, I do know one thing for sure is that my daughter and I will be even more strongly bonded from going through this together then we were before.

I’m hoping these X-ray picture attachments are viewable for everyone, this one is a month before the surgery, it is a front view, her curve was on the right side of her torso on her back so her rib cage on the right side looked almost like it was winged out.  A curve of this degree (92%) and even further puts a lot of pressure on many different areas of the body, my daughter is special needs and non-verbal so knowing exactly how it was affecting her was not precise but I did notice that her oxygen capacity was definitely compromised, she tired just from walking across the room.  From December of last year to April of this year she had lost 25 pounds because she just wasn’t eating her usual, again hard to know exactly how strongly it was affecting her but the X-ray also showed that her spine was pushing inward as well which meant her stomach capacity may be compromised, hence the weight loss and lack of regular feed.

When the decision was finalized that a surgery date needed to be set it seemed like the worst day but as the time drew closer to that date I saw her quality of life was diminishing with each day that passed so I started to feel that the surgery couldn’t come soon enough, it seemed like she was suffering.

The surgery had to be done in two stages, each surgery is quite long in duration so doing the entire procedure at once was too much.  The first surgery had one hiccup but it wasn’t severe.  Like everything in the medical field, advancement in all procedures are ever evolving so the procedure for this surgery had a “less invasive advancement”, unfortunately my daughter’s system was so compromised from the curvature that the classic procedure was needed.  It was no worse off and she came through it really well.

The plan was to do the surgeries back to back so the 2nd stage was set for the following morning and it was the longer of the two procedures.  This is where things took a different turn which wasn’t necessarily a complication but rather a forced delay because her doctor is meticulous about every aspect of his patient’s well-being (one of the main reasons I have so much respect for him), so the last couple hours of the surgery were to be completed on a third day, again slated for the following morning.

All of these changes were very difficult for me and I spent a lot of time reeling myself from one end of the emotional spectrum to the other which was definitely not going to do either myself or my daughter any good.  From the time my daughter was born (prematurely 14 years ago) I’ve had to step back and let doctors do what they need to do and trust that they are doing the right thing.  As a parent our programming is to protect and when you are forced out of that space because you aren’t able to give them what they need it can be difficult, terrifying and overwhelming.  Even though I am a positive minded person when any sort of complication or delay arose I would find my thoughts racing into the worst places and I was unable to control them.  My logical and intellectual mind was completely overruled and overwhelmed by my emotional connection to my daughter, she is absolutely everything in my heart and it killed me to not be able to do anything.  Even now when I think about it I still feel emotional, I think it’s impossible to separate the two when it comes to our children, no matter how strong you are.

The doctor successfully completed her surgery and she is now beautifully straight and has many opportunities for advancement ahead of her.  I don’t think I could fully convey my gratitude toward the doctor and his team for basically saving her life, she can breathe with ease now.  Without this surgery she could have had a multitude of medical difficulties that could plague her continually into the future, let alone the fact that her oxygen intake was on a steady decline and there’s no way to know how much but with the direction she had been heading it didn’t seem positive.  Simply stated, without breath, you don’t have life. 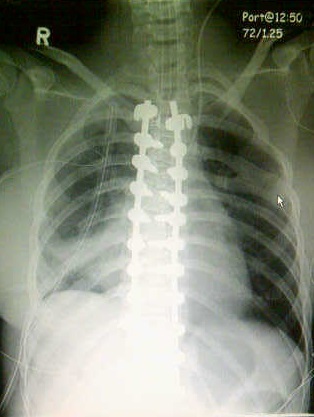 This X-ray picture is post-surgery, she now has a rod fused to either side of her spine in the thoracic region and many screws (I think 11 a side, total 22) to keep the rods in place to her spine.  It sounds really harsh, and it is, and honestly I’m surprised in a week after surgery she doesn’t have a lot of pain, part of that is that she does have a high pain tolerance but I also think it is a good indication of how much pain and/or discomfort she was in enduring prior to the surgery.

There were additional issues into recovery, the biggest concern is always infection because this is such a big surgery and unfortunately my daughter ended up with 2 infections.  The full extent and effect these infections had on my daughter’s threshold and tolerance cannot fully be determined but she ended up having a seizure on day 3 post-op and honestly that just did me in.  My own tolerance for remaining strong was severely challenged at that point and my mind could no longer carry my positive thoughts, I was devastated and terrified.  The good news is that the infections she developed are treatable and the seizure could have been caused by all the extenuating factors that contributed to her low threshold.  Regardless, as a precautionary measure she is being treated for an additional infection to cover off the seizure, which is believed to be associated with Meningitis.  As I stated earlier all of these infections are treatable, serious but treatable so I know the worst is over.

I think besides the fact that I’d had little sleep due to worry and anxiety over her well-being and surgical outcome, the most difficult aspect was trying to absorb all the information the various doctors now involved because of the seizure were advising.  The doctors have their own language and get involved in discussion while trying to find the best course of action, unfortunately for the layman that isn’t knowledgeable on medical terms it can be scary to listen to so it’s really important to ask questions to clarify so you aren’t left with your own thoughts as I was.  My imagination has always been something I’ve had to reel in because left to my own devices I will blow things farther out of proportion than they are and in a medical situation like this I can be my own worst enemy.

That all being said, after much clarification and solid discussion with the many specialists I have finally been able to direct my efforts to what my daughter and I do best together, which is recovery.  A little hard work has never deterred either of us and it won’t now, she is on the mend and onto a healthier and happier life.

I WANT TO EXTEND MY SINCEREST THANKS AND DEEPEST GRATITUDE TO DR. MIYANJI AND HIS SPINE TEAM AT BC CHILDREN’S HOSPITAL, ADDITIONAL SPECIALISTS AND MANY NURSES WHO WERE ALL INVOLVED IN FELICITY’S PRE AND POST SURGERY CARE.

IT TRULY TAKES VERY SPECIAL PEOPLE TO DEDICATE THEIR LIVES TOWARD THE HEALTH AND WELL-BEING OF OTHERS.

Posted by shelleyhallmark on August 25, 2013 in Blog